275 replies to this topic

I'll believe it when I see it.

Wanna bet? Double or nothing.

The thing that has me worried? Someone from 343i had to okay the CGi trailer. Now, you can say there's not armor abilities in the game. That's fine. But the stuff in the video did look like armor abilities (ground pound attack, jet pack, etc.)

Even more realistically, 343i people collaborated on it. And I can't imagine they simply put all that stuff in there for no reason.

Aye. I'm hestitant to believe that dashing and ground-pounding is anything but an AA by another name.

Ivan, I refuse to make any further bets with you at this point - sorry duder.

Alright, I still expect you to pay for our last one though. Not letting you off the hook sucka.

Not gonna happen. There's no way you didn't have some kind of hint.

Besides, you're so personally invested in Microsoft that buying the game is basically like putting $60 in your pocket anyway, right?

So you're saying your word is worth nothing. It's twenty dollars guys. Ivan, don't worry about it and get back to celebrating good Obama. Drew, don't make twenty dollar bets if you're not going to pay when you lose.

Typical Drew, he's probably some girl in China and can't pay for all we know. A man's word is no good these days.

Typical Drew, he's probably some girl in China and can't pay for all we know. A man's word is no good these days.

Ivan, you of all people should know what to expect from Drew McFakewaifu's word.

My word is worth its weight in gold.

My word is worth it's weight in gold.

Oh I see what you did there, even with the grammatical error.

My word is worth it's weight in gold.

Oh I see what you did there, even with the grammatical error.

I was going to scrounge up a 7-day XBL Gold code and post that for you Ivan, but I can't seem to find any left in my house. You'll have to settle for these delightful gold m chiefs instead. 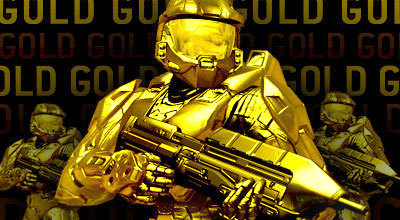 edit: some random x-posted thoughts on H4 and H5;

I liked the base combat in Halo 4, the DMR felt great to use in the beginning... But over time, it became clear that the changes 343 had made were too extreme. They fundamentally changed the way Halo is played, and not for the better.

Matches quickly swing in favor of the stronger team, as they are awarded an endless stream of power weapons that become easier and easier to obtain. By the end of the match, one team is running around with snipers and rockets while the other sits helplessly, getting pounded into oblivion with no chance to strike back.

Instead of emphasizing teamwork and map control, it's merely a race to get a handful of kills and call in ordnance as quickly as possible, regardless of the game type. In that way, it is no different than Call of Duty. The objectives are merely a distraction in what is ultimately a game of attrition.

I sincerely hope that the comment about arena mode is proof that 343 recognizes this to at least some extent, and is taking steps to correct it. Removing armor abilities is definitely a huge step in the right direction as well.

Depending on how powerful the ground pound is (if that's actually what it is), it makes me a little worried about melee combat, being one of the original three pillars of Halo gameplay. Maybe I'm over-thinking this and it's not going to be a big deal, but 343's track record thus far does not exactly inspire confidence...

The slide I don't really mind. It doesn't break map traversal like the jet pack, and merely serves as a quick way to get into a crouch and maintain your forward momentum for a little while.

This is pretty interesting to think about.

I'll never understand these YouTube channels that take tiny scraps of information and make a video spanning 15 minutes of speculation. There is perhaps an interesting question to be asked relating to the title and the barrier kills. However, this is something that could be said in a sentence or paragraph. And most certainly without asking me to click like on your channel.


I'm sorry, but this is graduate level over thinking. If there is any correlation, at all, to "barrier" kills, I'm done forever.

Rest easy. The Didacts little speech at the end of Halo 4 says that Forerunners are/were Guardians of something or other (i'd venture the Mantle....been a while since I finished the game). I'm sure that's what it is referencing.

If Abilities were on map pickups, with defined pre-set timers for spawning, and littered about the map like weapons and powerups in good Halo games, would you mind them then?

Maybe fighting over Ground Pound will be as important as Rockets - you can get a ton of kills but any team with an IQ is gonna fight tooth and nail to pick up the item on spawn.

That really depends, but my current stance on that either way is no. I do not want the jetpack returning or anything resembling armor lock. We already know they are incorporating these "abilities" into everyone's movesets so this probably won't happen anyway.

Also tagged with one or more of these keywords: Halo 5